Eating crow is a colloquial idiom,[1] used in some English-speaking countries, that means humiliation by admitting having been proven wrong after taking a strong position.[2] The crow is a carrion-eater that is presumably repulsive to eat in the same way that being proven wrong might be emotionally hard to swallow.[2] The exact origin of the idiom is unknown, but it probably began with an American story published around 1850 about a dim-witted New York farmer.[3] 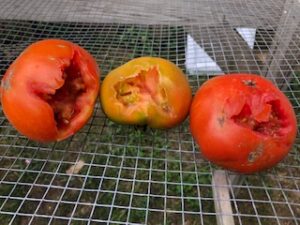 The crows are eating my tomatoes.  Just as they start to turn ripe.    They pulled up all my sweet corn….I planted it three times.  I’m infuriated.  Crows get their bad name from eating other things besides tomatoes and corn – but nevertheless….

Farm News:  The crows are eating my tomatoes.  I also think they have been eating my bell peppers.  I am so aggravated!

What’s in the bucket:  Tomatoes, the ones NOT eaten by the crows!!  Luckily they haven’t ravaged my cherry tomatoes yet.  Cherry tomatoes, basil, Daikon, cucumbers, squash, green beans, edamame soybeans, peppers.  AND – yahoo PEACHES from Jones Farm – and Blueberries from our farm and from our friends at Broadfork Meadows Farm.  This will be the last week for fruit probably – other than from our farm – maybe a few blueberries and pie apples from our trees.

Even though lettuce is out of season – you can still make a refreshing salad as a side dish.

Following a recipe from the Spruce Eats .  Serve this with a piece of King Salmon from Thomas Persinger.  He has the most amazing selection of ethically sourced fish.  http://www.marithymeseafood.com

Japanese cuisine has many different types of salads, but one of the most traditional is known as sunomono, which is a salad simply seasoned with rice vinegar, salt, and sugar. While the salad can be made with almost any type of vegetable, one of the most common ingredients is cucumber. In general, sunomono is best made with Japanese cucumber; however, substitutions may include Persian cucumber, baby cucumbers or English cucumbers.

Put cucumber and daikon slices in a large bowl and sprinkle with salt. Allow the vegetables to sweat for about 5 to 10 minutes. You’ll notice excess liquid form at the bottom of the bowl.