“In a world that was not easy for Alice to bear or understand, flies were the final and malicious burden laid upon her.”
― John Steinbeck 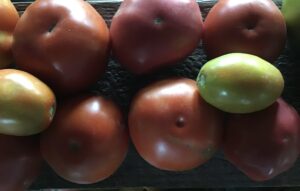 It is finally tomato season.  The thing everyone waits for.  They are trickling in…. but the first one is always the best.

I think of July as fly season.  Nothing worse than to have your hands busy picking vegetables and be attacked by biting bugs!  The horses run when they are under attack.  Oh, if I could run fast enough to get away!  Not sure I could ever run that fast.  The cows pack up – travel in a tight herd.  They must knock them off each other with moving tails and feet.  But I worry that they are miserable like I am.

Farm News:  4 weeks of CSA left.  It’s been a different year – as they are all different.  I’ve been doing this a long time, and I am still surprised and humbled every year.  Just when I think I know something….

For instance, I planted summer squash this spring.  It got sick and stayed sick and poorly until I had a meager harvest.  I planted a second succession about a month later.  Same varieties, same circumstances, same garden dirt – and it flourished.  Giant green leaves shading beautiful and loaded plants.   I have quit trying to figure it out:)

What’s in the bucket:  Tomatoes!  Yay.  A few, next week more.  And guess what else?  Potatoes.  Yes not nearly as exciting – but I have a new recipe to share.  cucumbers, onions, summer squash, and basil.

As for the cucumbers – I know they are overwhelming.  I’m usually not a lover of the big pickling cucumbers, but I found a new recipe for refrigerator pickles.  Nice because you can use the bigger picklers, and slice them in wedges.  If you have dill leftover from last week, here’s your chance!  If not, dill seed will work as a replacement.  Make sure you use the pickling cucumbers – the shorter, fatter cucumbers with whiter ends.

Recipe follows – from Once upon a chef

Refrigerator pickles are quick and easy to make — no sterilizing jars or special equipment required.

AND  as far as the potatoes 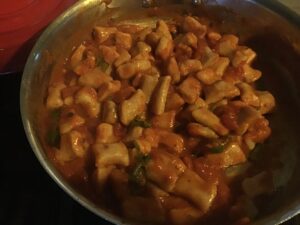 Gnocchi.  It was fairly easy and overwhelming all at once.  But it turned out delicious (even Curtis loved it)  I used Russet and white potatoes mixed – and put them in my pressure cooker instead of boiling them – just to make it easier.

The recipe is from anitalianinmykitchen.com

Happy Eating and thanks for eating local food from Circle S Farm.